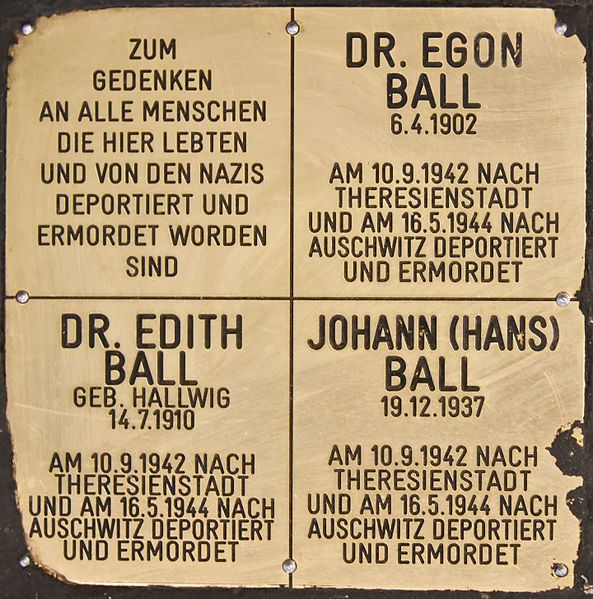 Each stone tells a story of real people… people who had their lives stolen.

Throughout Vienna, gold plated plaques called “Stones of Remembrance” have been placed by German artist Gunther Demwig in front of the buildings where Jewish families once lived.  These symbolic gravestones were designed to honor victims of the Holocaust who were not afforded a grave and serve to commemorate their lives.

Vienna’s Jews were under immense pressure to emigrate or were forcibly removed by the Nazis.  After being physically beaten, insulted, demoralized and abused, Vienna’s Jews had their property and personal belongings confiscated.  The vast majority of these Jews were sent to their deaths in the concentration camps.  Here and around the city, approximately 22,000 Stones of Remembrance have been embedded in the walls or placed in the sidewalks in front of these residences.

You can learn more at the Stones of Remembrance Association for Jewish Victims of the Holocaust.

In Leopoldstadt, at the corner of Nestroyplatz and Praterstrasse, is a large ornate white building in the square.  This is the Nestroy Hof, one of Vienna’s historical theaters. With a restaurant, beer garden and dance club, the Nestroy Hof was once a focal point of Jewish social life in Leopoldstadt. 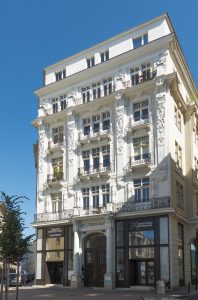 The Nestroy Hof was built in 1898 by Austrian architect Oskar Marmorek, but not for himself. After marrying his young bride, painter Nelly Schwarz, Oskar decided he might need to get in good with his in-laws.  So… he built this magnificent theater for his father-in-law, Julius Schwarz.  The Anschluss changed everything.

In 1940, the Gestapo confiscated the theater from the Schwarz family. They promptly gifted ownership to the Polsterer family, prominent German industrialists supporting the Nazi war effort.  After the War, this majestic theater was neglected and forgotten. In 1997, it had become a supermarket. Then in 2003, the original ceiling was rediscovered. Shortly after, workers surfaced the long-forgotten theater stage. Although the theater has been restored to its former glory, even today it is still owned by the descendants of the Polsterer family.

On the corner of Nestroyplatz, closest to the Ubahn sign and Praterstrasse, is a gold plaque embedded in the sidewalk.  This stone honors two passionate theater lovers, Bernhard and Adele Sachs. Bernhard and Adele lived in an apartment building that was once located where you are standing. The Sachs’ neighbors were the actors who performed at the Nestroy Hof. 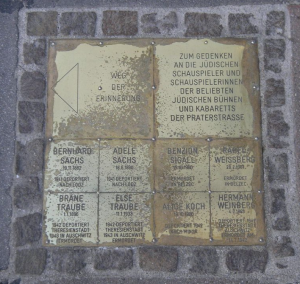 Stone of Remembrance for Bernhard and Adele Sachs and their fellow actors and musicians. steinedererinnerung.net

In 1941, the Nazis confiscated their apartment and deported the Sachs to the Łódź Ghetto in Poland where they perished. Kurt Sachs, their surviving son, placed the plaque where he knew his parents walked often, happy and full of life, crossing the square on their way to the theater.

OTHER STONES OF REMEMBRANCE THROUGHOUT VIENNA

If you make your way through the city of Vienna, you will undoubtedly see Stones of Remembrance embedded in the sidewalk and the exterior walls of buildings.  Leopoldstadt was the heart of the pre-war Jewish community.  As such, there is the largest concentration of Stones there.  Please be respectful and courteous. 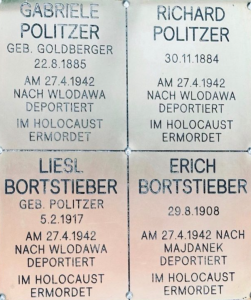 Jewish families arrested and deported from Austria who perished in the Holocaust. steinedererinnerung.net 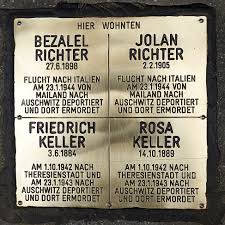 These victims of the Holocaust “Fled to Milan, Italy. They were deported to Auschwitz where they were killed. 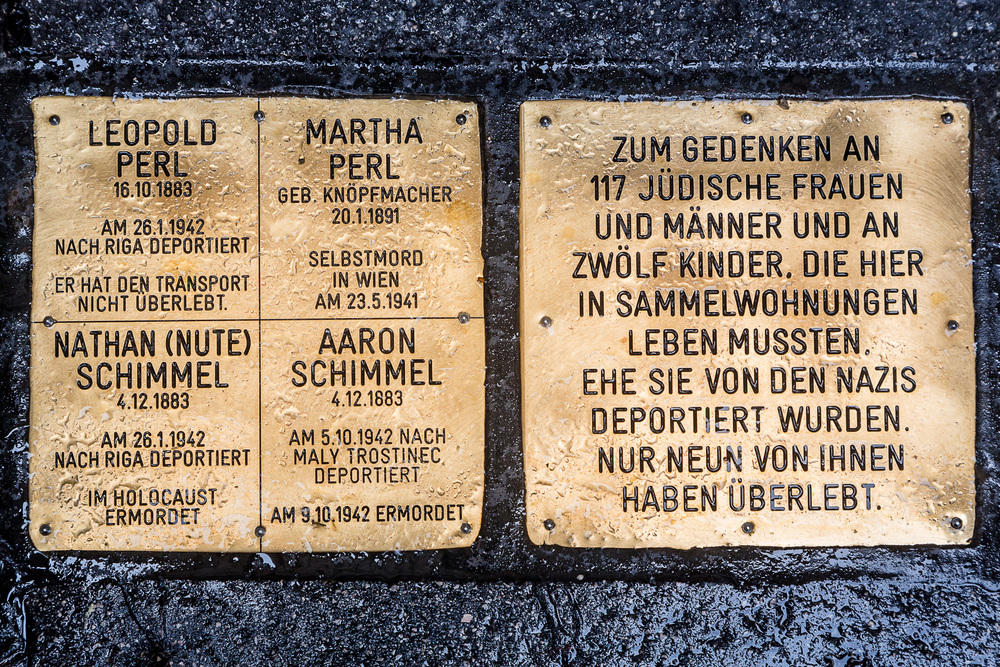 In memory of the 117 Jewish women and men, and twelve children. They lived here in this apartment building before they were deported by the Nazis. Only nine survived. 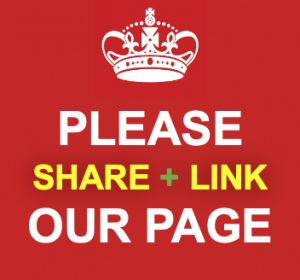 Disclosure: White House Travel is a participant in the Amazon Services LLC Associates Program and Agoda affiliate programs, designed to provide a means for us to earn fees by linking to Amazon and affiliated sites at no extra cost to you. 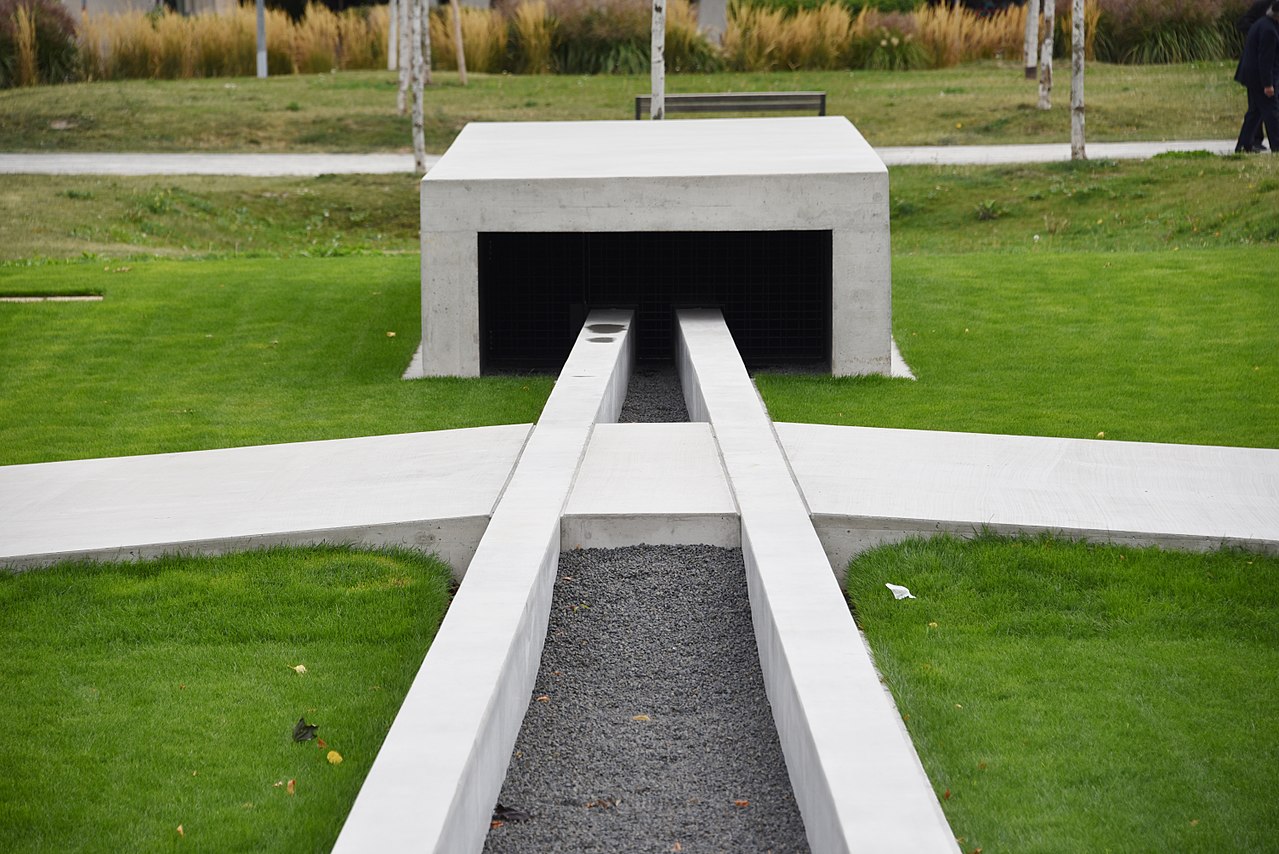 VIENNA’S JEWS WERE DEPORTED FROM THESE FORGOTTEN INTERNMENT CAMPS PERSPECTIVES     Unlike in Germany, where the Jewish population was deported from several different cities, in Austria deportations of the Jewish population were centralized from Vienna’s Aspangbahnhof or Aspang Railway Station.  From February 1941 to October 1942, the majority of the Vienna’s Jewish population was deported to ghettos and extermination camps in the east from this train station.    The Nazis deliberately chose the Aspangbahnhof because it was nestled away  in a quiet neighborhood in the middle of the city, away from the larger stations and main railway routes.  Although the Nazis hoped the heinous activities at this railway station would largely go unnoticed, the weekly transports of 1,000 Jewish men, women, and children from Aspang were carried out in plain sight. The transports to the concentration camps were organized by Austrian born SS Captain Adolf Eichmann, who was in charge of the Nazi Central Agency for Jewish Emigration in Vienna.  Eichmann had one primary objective — to speed up the rate that Jews were being deported from the city. Before being deported, Jews were held against their will at four internment camps in Vienna — Kleine Sperlgasse 2a, Castellezgasse 35, and Malzgasse 7 and Malzgasse 16 — all in the 2nd District.  At these camps, the Jews were bullied, humiliated, and robbed of their last possessions.  Between 1939 – 1945, a total of 48,953 Jews were deported from Vienna.  Of this number, 47,035 Jews were forcibly transported on trains that departed from the Aspangbahnhof.  Tragically, only 1,073 of the Jews deported from the Aspangbahnhof would survive the Holocaust.    HOMECOMPANION GUIDE Disclosure: White House Travel is a participant in the Amazon Services LLC Associates Program and Agoda affiliate programs, designed to provide a means for us to earn fees by linking to Amazon and affiliated sites at no extra cost to you. 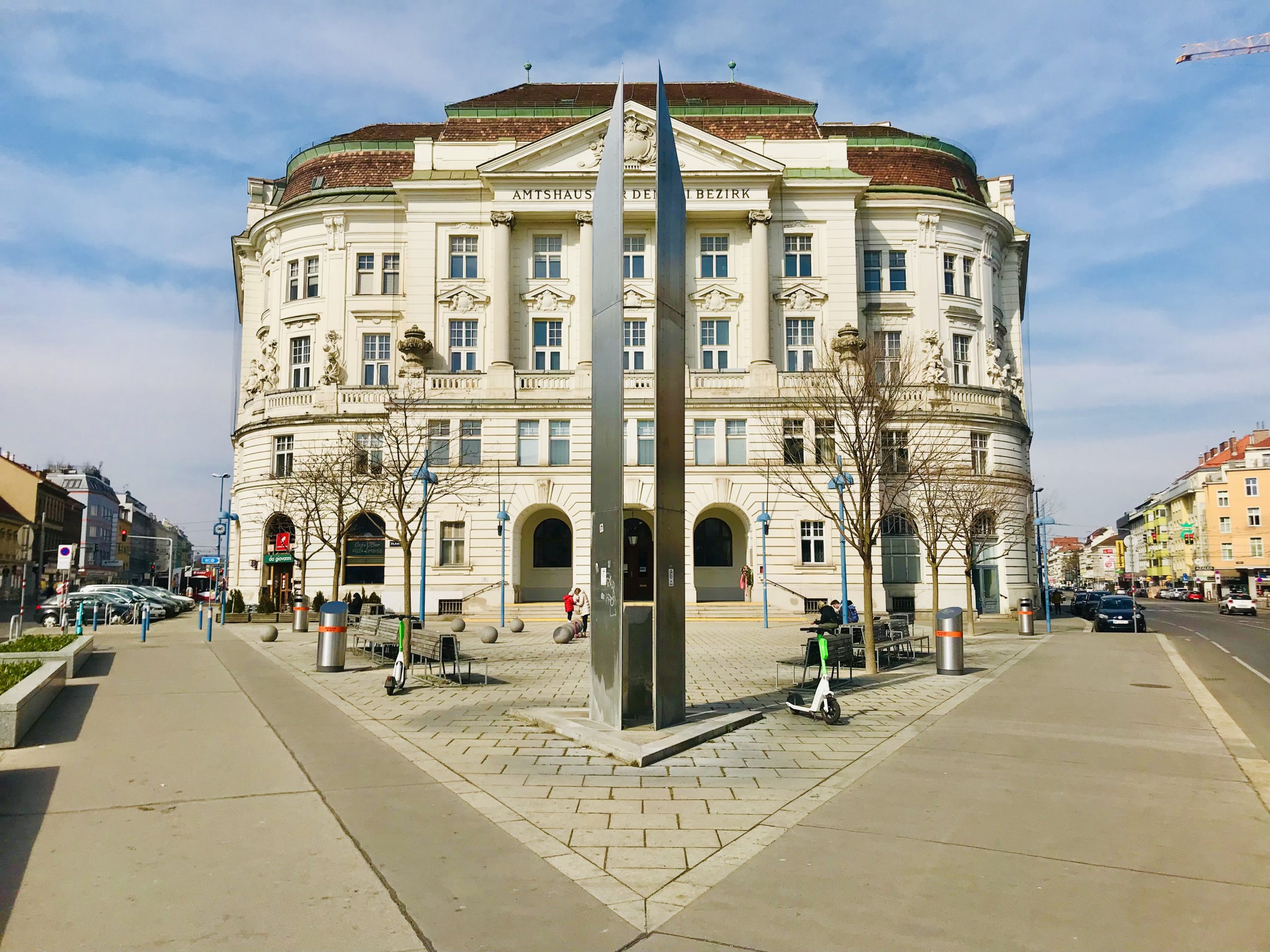 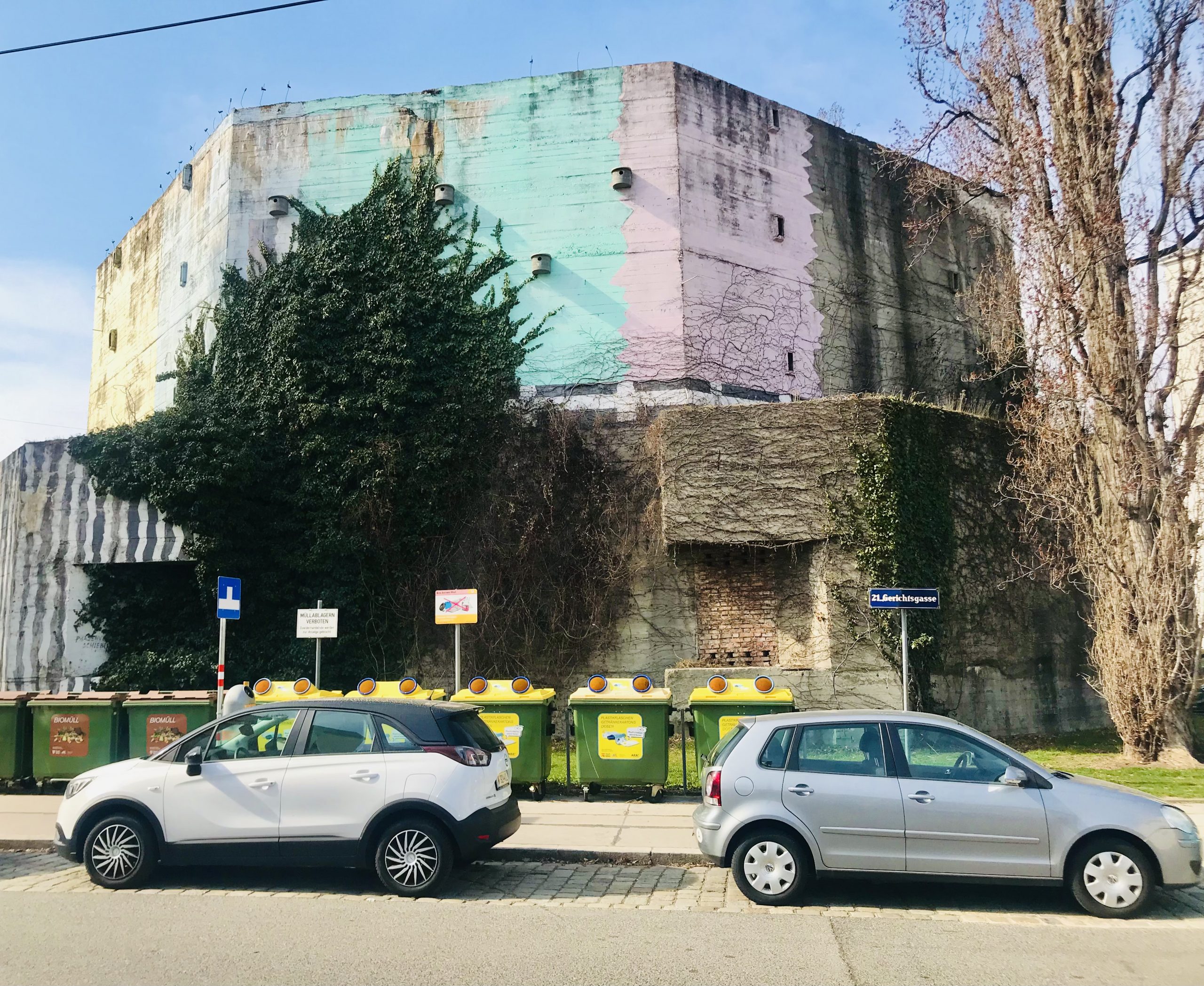 A WORLD WAR 2 AIR RAID SHELTER NEAR VIENNA HAS A PASTEL MAKEOVER Gerichtsgasse, 21st District   Nestled in a quiet neighborhood across the Danube River in the 21st District, just minutes from the city center of Vienna, is one of the city’s remaining relics of World War 2.  This massive concrete Air Raid Shelter near Vienna was constructed during Summer 1944 – Spring 1945.  You will need to work hard to find this gem as it is not on any tourist maps.  The front of the Air Raid Shelter has been painted in warm pastels.  The Shelter is located just off the sidewalk and sits between two modern apartment buildings.  There are no restrictions or fences, so you can walk around and explore as much as you like.  Although the front of the Air Raid Shelter has been painted, the rest of the structure is “as is” and its 1940’s era concrete remains is good condition.  The doors have been bricked up so you cannot enter.  Although the Air Raid Shelter has been characterized as a Memorial, there are no visible signs to this effect. ALLIED BOMBING OF VIENNA The city of Vienna was bombed 52 times during World War 2.  Allied bombs destroyed 37,000 buildings and approximately 20% of the entire city.  The first air raid took place on 4 September 1942, when a lone Soviet bomber targeted the city.  Allied planes began bombing Vienna in earnest in 1944.   The skies over Vienna were defended by a ring of anti-aircraft batteries set up around the city and by three pairs of Flak Towers.  By early 1945, Vienna had already faced 1,800 bombs.  In February and March 1945, 80,000 tons of bombs were dropped by US and British aircraft.  270,000 people were left homeless. CONSTRUCTION OF THE AIR RAID SHELTER Hungarian Jews as well as Polish and Russian slaves from the Vienna-Floridsdorf satellite camp of the Mauthausen concentration camp were used as forced labor to build the Air Raid Shelter.  After completing the Shelter, the Nazis forced these laborers to march 120 miles to the main Mauthausen concentration camp in Upper Austria.  In 1945, the Shelter was damaged when a munition exploded on the roof.      PURPOSE OF THE AIR RAID SHELTER This Air Raid Shelter was specifically built to protect the workers at the nearby Siemens facility in Floridsdorf.  Among other armaments contracts, this Siemens facility produced control components for the V-2 rocket.  The Air Raid Shelter also protected workers at the Heinkel-Süd aircraft factory, the Floridsdorf Oil Refinery, as well as technicians at the nearby Messerschmitt Engine Factory. In early July 1944, Allied bombers struck the Heinkel-Süd plant in Floridsdorf, destroying the third prototype of the He 177B four engined bomber, and possibly damaging the incomplete fourth prototype He 177B airframe. During the Allied oil campaign, American B-17 and B-24s dropped their payloads 16 times on the Floridsdorf Oil Refinery. AIR RAID SHELTER TODAY NEAR THIS PLACE VOICEMAP | VIENNA SELF GUIDED WALKING TOUR. Want to learn how the Mossad operation to bring Nazis like Adolf Eichmann to justice originated in Vienna?  Check out our VoiceMap self guided walking tour: VIENNA + THE HOLOCAUST: FROM TRAGEDY TO JUSTICE.  You can preview it for FREE.  Start point is Nestroyplatz on the U1 red line in the 2nd District. SEEGROTTE HINTERBRUHL MINE.  The Seegrotte Hinterbruhl Mine is a family friendly attraction that was once used by the Nazis to build the world’s first fighter jet. WORLD WAR 2 SITES NEAR VIENNA | MESSERSCHMITT ENGINE FACTORY.  Explore World War 2 sites near Vienna along a scenic hiking trail.  See the Messerschmitt Bf 110 aircraft repair factory and the front lines of the Battle of Vienna. BEST PLACES TO STAY SO/ VIENNA. Designed by the famous architect Jean Nouvel, this stylish hotel is near all of the sites. Panoramic views over Vienna, a gourmet restaurant, a gym, and FREE spa facilities. Modern, spacious rooms with air conditioning, FREE mini-bar, and FREE Wifi. ADDRESS: Praterstraße 1, 02. Leopoldstadt, 1020 Vienna. RUBY LISSI HOTEL VIENNA. Boutique hotel located in an 18th-century building in Vienna’s first district. Luxuriously furnished rooms with air conditioning, wooden floors, use of tablet device and FREE Wifi. Each room has a Marshall amplifier and guitars can be rented. Organic breakfast and 24/7 access to Italian antipasti and snacks, beverages and selected wines. ADDRESS: Fleischmarkt 19 / Laurenzerberg 2, 01. Innere Stadt, 1010 Vienna. GRAND FERDINAND VIENNA.  Opened in autumn 2015, located on the Ringstraße boulevard in the center of Vienna. Modern spacious rooms with air conditioning. Rooftop pool, 3 restaurants, fitness center, and FREE Wifi. ADDRESS: Schubertring 10-12, 01. Innere Stadt, 1010 Vienna. LE MERIDIEN VIENNA.  Located on the Ringstraße in the heart of Vienna. Modern, spacious rooms with amenities. Indoor pool, spa facilities, fitness center, FREE mini-bar, and FREE Wifi. ADDRESS: Robert-Stolz-Platz 1, 01. Innere Stadt, 1010 Vienna. BOOKSHELF HOME  AUSTRIA Disclosure: White House Travel is a participant in the Amazon Services LLC Associates Program and Agoda affiliate programs, designed to provide a means for us to earn fees by linking to Amazon and affiliated sites at no extra cost to you.